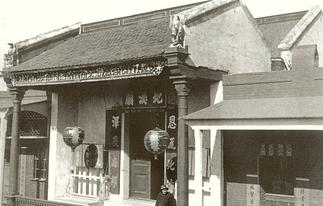 The Bok Kai temple stands at the Southwest corner of First and D Streets in Marysville, California. Originally built in the 1850s by Chinese immigrants the temple was destroyed by flooding and then rebuilt in the 1880s. Serving as a meeting hall, court, and a place of worship, the temple was built with it's main altar facing toward the river. This was done so that Bok Eye could ward off any evil and protect the community of Marysville from flooding.

Bok Eye is considered the god of the North and is said the be the Chinese water god whose powers have successfully prevented Marysville from flooding since the 1900's. Bok Eye's powers include overseeing waterways, water systems, irrigation and rain. This could be why it has never rained during the Bok Kai parade.

One of the unique characteristics of the Bok Kai Temple is the surviving mural, depicting vivid scenes of Chinese culture. The painting extends across the upper wall of the temple's outside front entrance. Leslie H. Rainier, a painting conservator from the Getty Conservation Institute in Los Angeles, examined the painted frescos and found "the quality and execution of the scenes equal to the few Taoist paintings in American museum collections." 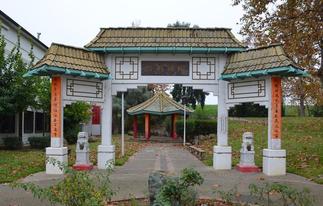 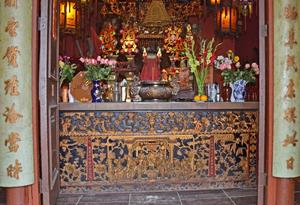 The Bok Kai parade's rich history is believed to have started as far back as the 1850s. Always held on the weekend closest to the second day of the second month of the Lunar calendar it is the longest continually held parade in California. The parade honors Bok Eye, the Chinese Water God, who protects Marysville from flooding.

The event brings in thousands of visitors from the local community as well as San Francisco, Seattle, Oregon, and even Hong Kong. The parade features community organizations, schools, businesses, traditional Chinese lion dancers, lots of fire crackers and the famous 175 foot long golden dragon named "Hong Wan Lung." Dragons play a big part in the Chinese culture as well as in the Bok Kai parade's history. Check out the history of our parade dragons here.

The celebration of Bomb Day, also know as Bok Eye's birthday, is a tradition that began in the 1880s. Today the celebration continues as a community wide affair drawing visitors from all over. Bomb Day received it's name for the bombs and huge firecrackers that are fired off during the celebration.

For more information about the Bok Kai Temple and Bomb Day please visit their website.